Why Every Athlete Needs a Coach 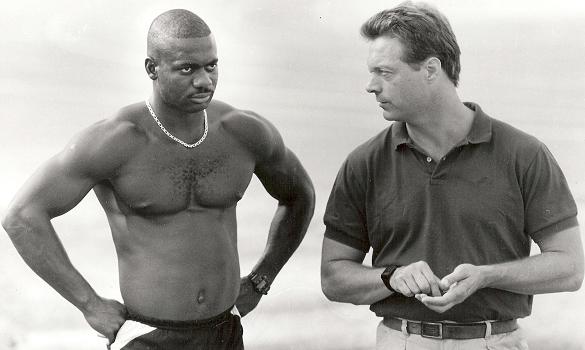 As a strength & conditioning coach, it baffles me sometimes to see how many athletes say they are “dead serious” about being the best, but will NOT do the little things to get better.

Ben Johnson (Left), one of the fastest sprinters in history with the late, great speed coach Charlie Francis. Even the world's best athletes have coaches!

Just about EVERY athlete that has gone on to be the best has had a coach along the way to guide them in the right path. There’s no way any one person, or in your case, one athlete, can do it alone.

Yes, I understand that many athletes THINK they know how to lift weights, train the right way, and have all the  best intentions in the world. But normally, when one goes about it themselves, they  end up screwing it all up and mashing all sorts of things together into one “super program” and quickly burn out.

Then the classic, “I’ll do it tomorrow” syndrome kicks in. One day turns into two, and soon tomorrow turns into yesterday. See what I mean? It’s a vicious cycle that unfortunately most athletes will fall into because they simply thought they could “work out on their own”. Any of us out there know how well that usually goes. Skipped workouts become more common, cheating your training program beomes the norm, and soon you just give up all together.

Why go through all of that alone? There’s no reason why you shouldn’t seek out a coach. Any athlete that particpates in a sport plays for a team, which is led by a head coach and usually a few assistant coaches. Why then, are athletes content with NOT seeking out professional help to get stronger and faster? That’s like saying you can perform dental work on yourself because you think you can do it because a buddy showed you how. Sure, you might have a general idea of what’s going on, but I think the dentist MIGHT just do a better job? Just saying..

So, what’s the moral of the story here? All SERIOUS athletes should consider investing in their health and sports performance by seeking out professional guidance in a strength & conditioning coach.

It’s now extremely common for the best of the best college athletes to train for 3 – 6 months in preparation for their NFL Pro Day/NFL Combine with a group of other like-minded athletes at a sports performance training facility. Even current pros STILL train their butts off because they know that if they aren’t training hard, someone else is going to be and they’re out to take their JOBS. Some names that come to mind include: Brian Cushing, Sinorice Moss, Kevin Walter, David Diehl, Dhani Jones, etc. All STUD NFL players who train with Joe Defranco in New Jersey (one of the best training facilities in the U.S.) becaue they are dead serious about being the best, even though they are already elite level athletes.

Many of you may or may not know, but I actually walk the walk myself. I know how vital a coach is to being great; recently I have been training for Olympic Weightlifting (clean & jerk, snatch) and knew that if I wanted to get really good at the lifts, I needed help and a watchful eye from someone who knew what they were doing. So, I made a decision and went for it by hiring Freddie Myles of Myles Ahead Weightlifting in Ronhert Park, CA to help me be the best that I can be at the sport of weightlifting. I drive just under 2 hours round-trip from Napa to Ronhert Park twice a week to train with Freddie at his gym without hesitation because I knew that I NEEDED it if I wanted to become great. So, when I say hiring a coach is a good thing, I’m not just saying it to blow smoke up your a*s. I truly think it is the best decision and investment and athlete can make for themselves if they wish to become stronger, faster, and more explosive. “Doing it yourself” simply doesn’t cut it any longer. The competition out there is becoming fierce and if you aren’t doing everything in your power to get better, you’ll quickly be left behind!

So, the next time you say you want to be the best, ask yourself how bad you really want it. Because there are others out there who are training year-around, many of whom will be likely facing you on the competition field of play. Don’t be the one who was content with being mediocre. Invest in a coach and you will be far ahead of the pack.

This site uses Akismet to reduce spam. Learn how your comment data is processed.

GET THE PERFECT MEMBERSHIP FOR YOUR NEEDS

Simply fill out the form below and one of our patient, professional coaches will be in touch about our current membership options